Virali Shah is a first-year medical student at Albany Medical College in New York. She graduated from Union College and Clarkson University in 2019, as part of the Leadership in Medicine Program. Dance has always been a pivotal part of Virali‘s life. When she was 12 years old, she joined the Nrityangan Dance Academy. This cultural dance academy trained her in fusion dance styles that incorporated hip hop, lyrical, and Kathak, a graceful form of classical Indian dance. At an early age, she began to compete at local dance competitions and perform in annual recitals.

In college, Virali explored different dance styles unfamiliar to her, such as Modern Dance, Bhangra, and Bharatanatyam. After three years on the Bhangra Dance Team, Virali led the team as Captain during her senior year of college. She was passionate about her team and the culture she was creating on campus to promote diversity in dance. Upon the President’s request, she organized the dance team to perform at the President’s Inauguration Ceremony in Fall of 2019, which was a major breakthrough for the small cultural group. Apart from Bhangra, Virali was an active choreographer and dancer for Shakti, the South Asian Cultural Organization at Union.

Virali also trained in modern dance through Union’s Dance and Theater Department. She auditioned and performed in two dance-theater shows held by the Dance and Theater Department, including Breaking Boundaries and Colliding Shadows.  Breaking Boundaries conveyed the message of breaking racial stereotypes and societal constraints. Colliding Shadows, a show based on George Orwell’s 1984 novel, depicted the dangers of increasing surveillance in modern society and governmental control. Participating in these shows not only did challenged Virali as a dancer to improvise and use unique props, but also transformed her perspective on dance’s power to speak through action rather than words. 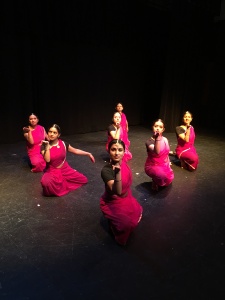 As a passionate medical student and dancer, Virali was ecstatic when she realized the multifaceted intersection of dance and medicine. She hoped to keep both her interests active in her life. During junior year, Virali enrolled in a course called the Franklin Method. The Franklin Method was a dance course that paralleled human anatomy and physiology with dance-therapy techniques to improve posture, relieve stress, and increase blood flow to the peripheries. This course highlighted the benefits of dance-therapy and inspired Virali to do her own research on dance-therapy to benefit patients.

As an aspiring physician, Virali desires to advocate for dance-therapy practices for patients with physical and mental ailments. Apart from dance therapy, Virali also became intrigued by the concept of narrative dance medicine. She was first exposed to narrative dance medicine through the Aseemkala Initiative in 2017. She and other dancers performed the Tripura’s Birth performance that illustrated the development of a human fetus through a sequence of embryological events. The depiction of the birth is juxtaposed with the societal message of traditional vs. non-traditional births and the blame placed on mothers who undergo non-traditional deliveries. Virali is driven by the mission of the Aseemkala Initiative and hopes to advance the organization through narrative dance medicine.