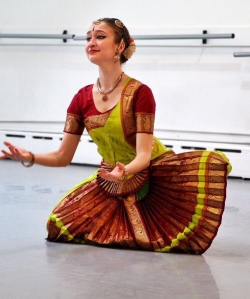 Sophia studied Bharatanatyam with Guru Dr. Sreedhara Akkihebbalu from the age of nine in San Antonio, Texas. Since her debut recital – ‘Arangetram’ – in 2010, she has given many solo performances in the US and abroad. She is an ICCR Empaneled Artist and a 2013 Young Arts Finalist.  Also a pre-professional ballet dancer, Sophia studied at the Bolshoi Ballet Academy in Moscow for six weeks under full scholarship in 2015.

She is currently a chemistry major student at Columbia University, and passionately continues her pursuit of dance. Sophia hopes to attend medical school after graduation, with an interest in geriatrics and orthopedic surgery. She wants to explore how dance can serve as a medium to cross cultural and religious boundaries.

What is the relationship between dance and medicine?

” I believe that traditional arts have the ability to heal in a way no medical treatment or pill can. I have performed for nursing home and inpatient facilities and seen decrepit, wheel-chair bound patients perk up to the sound of my bells or the movement of my body. I have also participated in socially conscious performances that have moved perfectly functional, outwardly healthy, audience members to tears because they know someone close to them that struggles with the issues we depicted through dance.”

How do you believe dance can improve medical care?

“As a dancer and an aspiring doctor, I am immersing myself in both the world of art and health care. I believe that bringing the two together can greatly benefit a system of healing people by bringing a more humane aspect to treatment. While modern medicine has worked wonders on improving the quality and length of life today, art still plays a fundamental role in healing that cannot be recreated. “

Choreography Project: On the Hidden Epidemic of Eating Disorders in Dancers

Please click the photo above for full video performance.

“Reflection” explores the relationship between dancers and the often hushed-over issue of eating disorders. I was inspired to choose this topic upon reflection of the many dancers I have met with, both in the ballet and Bharatanatyam world, who struggle with healthy eating and body image. Performing arts involve by definition an emphasis on the physical aesthetic, and for a dancer the body is their most important medium of creation. In this piece, a dancer completes her daily routine of practice, eating, and sleeping, all in front of a mirror that she continues to refer to. She becomes progressively more unhappy with what she sees in front of her, and starts restricting her food intake in an effort of control. She stops accepting food from friends. her dance practice becomes wilder, more a calorie-burning exercise than an art form, and she collapses out of hunger and exhaustion. Upon final inspection of her reflection, she no longer recognizes the feeble skeleton in front of her. She calls out for help, but this disorder is something she alone can escape. She breaks the mirror and walks away towards hope of recovery. The haunting sitar music by Anoushka Shankar slowly slinks down the musical scale, imitating how the numbers slide down on the weighing scale.

In researching this theme, I spoke to a handful of close friends, all dancers, who have recovered from mild to severe eating disorders within the past few years. With varying manifestations of disordered eating including anorexia (food restriction) and bulimia (purging), the common vein in all these interviews was the desire for control. Several dancers describe the horror with which they observed puberty naturally shaped their body, and they started restricting their caloric intake to attempt to halt nature. Another believed that if she achieved the ‘ideal dancer body’ her artistic director would promote her. In all the cases I heard, eventual exhaustion from poor nutrition forced the dancers to either seek treatment, switch company environments, or quit dancing entirely. “Reflection” is too short a piece to accurately depict coming out of an eating disorder; it is a long, complex, and often impossible task to mentally rid oneself of all the voices that distort one’s view of reality, of one’s own reflection. However, I chose to end the piece on a positive and hopeful note, since recovery is possible. Unfortunately, eating disorders are kept very secretive and hushed-up in the dance community, ironically because they are so prevalent. This piece is my small contribution towards increased awareness, for the benefit of all dancers struggling with their own eating and body image.