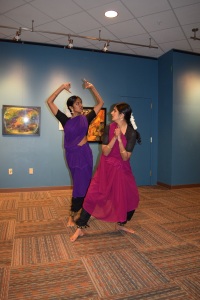 Damage comes to women in many forms—hate crimes, human trafficking, domestic violence, sexual harassment, and many others – which manifests in physical and psychological wounds. This dance, in an interpretive mixture of Classical Indian Bharata Natyam and Kuchipudi styles, demonstrates the internal struggle that a woman goes through in order to heal from such damage. Two dancers enact two parts of a woman’s being presented as separate parts (a mistreated self and a central self) that finally join together as she overcomes the trauma and heals into a whole, capable of self-respect and expecting respect from others. The title ‘Mardhini’ means warrior and is an homage to the strength of many survivors still healing and moving forward.